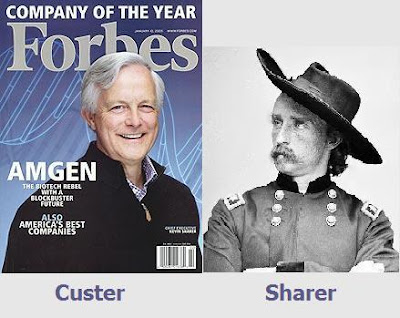 The LA Times have a revealing profile of Amgen's CEO Kevin Sharer:
Kevin Sharer has a thing for maverick war heroes.
In his sunlit office in Thousand Oaks, a massive portrait of the often-flamboyant Gen. George Armstrong Custer hangs across from his desk. It complements one of English naval great Horatio Nelson, renowned for defying orders.
Sharer has a military background himself, gained as an engineer on fast-attack Navy nuclear submarines during the Cold War. These days, at troubled Amgen Inc., he's emulating his risk-taking heroes more than ever.
The 59-year-old chief executive is betting Amgen's future on a handful of potential blockbuster medications. If the drugs disappoint, the biggest biotechnology company by sales will be left with little to fuel growth.
As it is, the stock is near a two-year low.
Congress is investigating after several recent studies raised safety questions about two of Amgen's bestsellers, anemia drugs Epogen and Aranesp, which account for 60% of the company's profit.
The Securities and Exchange Commission has opened an informal inquiry into Amgen's failure to tell investors that a drug trial was halted for safety reasons late last year. The company went public only after an industry newsletter disclosed the facts several months later.
And last week, Amgen's chief financial officer, Richard Nanula, resigned unexpectedly.
Looks like April 23rd will either be Sharer's Trafalgar or his Little Big Horn.
Posted by insider at 12:36 pm