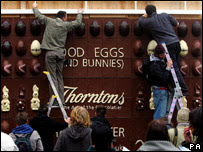 An edible billboard made from 390kg (860lb) of pure chocolate has been eaten in just three hours. Thorntons invited passers-by to tuck into the 14.5ft by 9.5ft (4.4m by 2.9m) sign in Covent Garden, London.

The Easter creation, a world first, was made of 10 chocolate bunnies, 72 giant chocolate eggs and 128 chocolate panels, each weighing 2kg. The billboard took three months to plan and 300 hours for the team of 10 to build and was expected to last a week.

"There was something for everyone from giant bunnies to hazelnut eggs," said chocolatier Barry Colenso. "I had to give it a lot of thought," said Mr Colenso, who designed the billboard. "Special moulds needed to be made for the thicker-than-normal eggs. There was no chance for a dry run."

A team of 10 assembled the billboard at 0600 . On the day he wondered if he had bitten off more than he could chew. "It wasn't good for the health of the chocolatier," he said. "One of the plaques fell off and five bunnies smashed, but luckily we had spares." "We worried if it would be too hot, too cold, or if it would rain, but in the end it was just a little bit chilly."

As the billboard was unveiled, 50 girls from the Brownies turned up on a chocolate finding mission. "Their jaws dropped as they asked, 'Is it real chocolate?'" Mr Colenso said. The Thorntons publicity stunt follows a Christmas sales rebound after poor trading figures last summer. Mr Colenso said he was sure the firm would create further giant chocolate items in future.