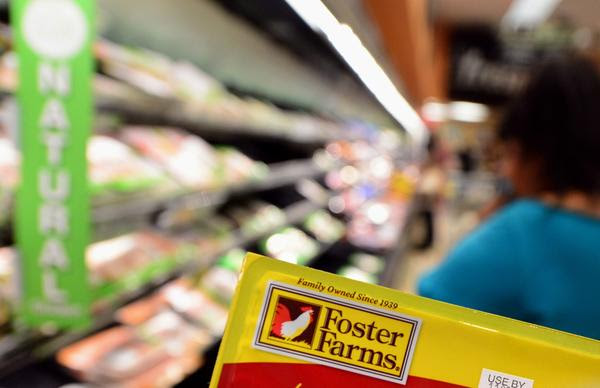 So far this year, more than 300 people have gotten sick from bacteria called Salmonellaheidelberg. Almost three-quarters of them live in California.

The Centers for Disease Control and Prevention reported that chicken produced in three Central California processing facilities is the "likely source of this outbreak" and that the bacteria are "resistant to several commonly prescribed antibiotics."

The CDC estimates that for every reported salmonella infection, there are about 29 more unreported cases, bringing the potential toll to more than 9,000 victims. About 42% of the patients who reported their illness have been hospitalized, an uncommonly high rate that indicates this bug is more virulent than usual. According to the CDC, drug resistance "may be associated with an increased risk of hospitalization or possible treatment failure in infected individuals."

Yet on a food industry website, an associate professor of food policy at Iowa State University downplayed the risks. "The occurrence of some resistance is not concerning," he said, "as virtually every bacteria is resistant to some type of antibiotic."

Resistance may be ubiquitous, but it hasn't always been this way. It's a new normal that industrial farming practices helped create. In fact, the CDC, the Food and Drug Administrationand the World Health Organization, among others, consider widespread antibiotic resistance a cause for grave concern.

Forty years of scientific investigation demonstrate that using antibiotics to make food animals grow faster, and to compensate for the overcrowded conditions in which they are raised, breeds drug-resistant bacteria that can infect and hospitalize people.

In fact, some of the outbreak strains of this salmonella resist treatment with several antibiotics used both in poultry production and human medicine. According to the FDA, drug makers sold about 30 million pounds of antibiotics in 2011 for use in chickens and other food animals. This was a record high and nearly four times the amount sold to treat sick people.

Fortunately, we have it in our power to slow the emergence of drug-resistant bacteria.

President Obama committed during the 2012 presidential campaign to "limit antibiotic use for livestock [to] … help ensure that antibiotics are used only [to] … address diseases and health problems, and not for enhancing growth and other production purposes." The FDA is planning to ask drug companies to stop marketing antibiotics for growth promotion. The policy is now at the Office of Management and Budget, one step from being finalized. It is a good start, but it ultimately falls short of Obama's promise.

Congress can fulfill it by passing the Preservation of Antibiotics for Medical Treatment Act and its Senate counterpart, the Preventing Antibiotic Resistance Act. These landmark bills would eliminate the use of antibiotics for all production practices, not only to promote growth but also to compensate for conditions that foster disease. Importantly, the legislation would still allow sick animals to be treated with antibiotics.

Meanwhile, many consumers are taking matters into their own hands and buying meat raised without antibiotics. Parents are urging their children's school systems to do the same; Chicago and Jefferson County, Colo., are early leaders. A growing number of hospitals, including UC San Francisco's Medical Center and Burlington, Vt.'s Fletcher Allen Health Care are serving meat from animals given antibiotics only to treat illness.

Antibiotics are modern medical miracles that rendered lethal infections minor nuisances. But that 20th century success story is turning into a 21st century parable about shortsightedness and denial. The president and Congress have more than enough scientific justification to curb antibiotic overuse in food animal production. It is time for them to act.

Gail Hansen is a doctor of veterinary medicine and senior officer with the Pew Charitable Trusts' campaign to reduce antibiotic overuse on industrial farms.