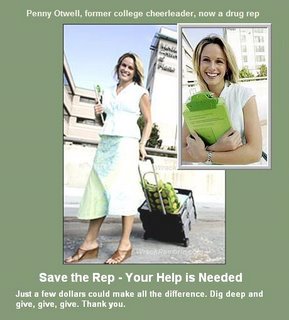 Are drug reps a "dying breed"?

In New Jersey – home of pharmaceutical giants Wyeth and Merck – sales and marketing employment at the biggest drug companies fell from 23 percent of their overall workforce in 2004 to 16 percent in 2005.

Both Wyeth and Merck have said rising criticism of the industry's long-standing strategy of smothering doctors with sales pitches has also prompted them to scale back their sales forces.

"Doctors are so incredibly busy with managing their patient loads, they really don't have free time" to listen to sales representatives, said Joe Mahady, president of Wyeth's American and Global Businesses.

That wasn't the case 10 or 15 years ago, when the industry began ratcheting up the numbers of sales reps in the belief that the more times a doctor was approached about a given drug, the more likely that doctor was to prescribe it.

For many years, that strategy worked, Mr. Mahady said, leading to the explosion in the numbers of sales reps nationwide.

During this period, the practice of "mirroring" a doctor became popular.

"Mirroring" is when several reps from the same company visit the same doctor to make the same pitch for the same drug again and again.

Meanwhile, Merck chief executive Richard C. Clark has been outspoken in explaining the company's decision to save money by reducing its sales force and increasing the efficiency of the reps who remain.

At meetings with analysts and shareholders in recent months, Mr. Clark has said the move was prompted primarily by negative feedback from physicians.