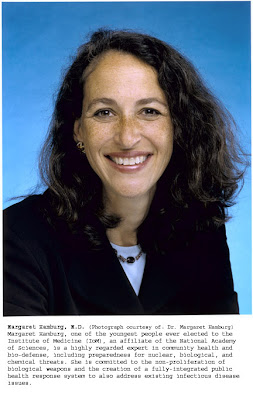 The Obama administration has tapped Margaret A. Hamburg, a physician and former New York City health commissioner with an interest in bioterrorism, to run the struggling Food and Drug Administration, according to people familiar with the choice.

Joshua Sharfstein, Baltimore's health commissioner, will serve as Hamburg's chief deputy, according to these sources. Sharfstein won national attention when he took on the drug industry and petitioned the FDA in 2007 to restrict the use of over-the-counter cough and cold medications for young children.
More
Posted by insider at 4:45 am